Come up with a way to demonstrate Zenuity’s autonomous driving commercial features for customers, partners and other interest groups.

We crafted a high-end virtual reality experience for Zenuity. We placed the user inside a self-driving vehicle and created a demo that successfully marries the technical complexity of the product with sophisticated and immersive storytelling.

The Zenuity team approached us with the assignment to create an immersive demonstration of their new product, to be commercially launched within 2020-2021. The solution was to be officially launched at CES in Las Vegas, the world’s gathering place for all innovators and leaders within consumer technologies. The final product should be inspiring and user-friendly and provide accurate and comprehensive insight into the technology’s inner workings. Taking the fast pace of the company’s operations into consideration, we knew we had to design a cutting-edge experience that is also portable, longevous and that has high reusability potential.

The commercial feature Traffic Assist Premium can be initiated with a simple activation request while driving on a highway. It allows the driver to take their hands off the stirring wheel and let the car safely handle parts of their daily commute under the driver’s supervision. When a certain list of requirements are being met, the software prompts the driver to switch over to autonomous driving mode. In the occasion that any of these conditions break, the driver is urged to resume control over the vehicle. Both states (self-driving and manual driving) are significant in order to successfully demonstrate the software’s capabilities. To add to that, a very important feature of the product, the safe stop, is only triggered when the driver fails to take over the automobile at a specific time. The experience had to match the standards of a real life test drive and ideally help the organisation save on resources by leveraging the product demonstration to larger groups of people simultaneously.

By this point, it became quite clear that we are dealing with a highly intricate technology that required a careful and precise execution in its virtual interpretation. We had to find the best possible way to demonstrate the full spectrum of the software’s capacity for every single user who would try the demo and we had to do that while keeping the surroundings of a very busy venue in mind.

We created “Zenuity Drive”: a virtual world filled with cyberpunk city scapes, futuristic automobile designs and giant fluorescent cat statues laid out over stretches of a sandy desert. We placed the user at the driver’s seat of an illuminated convertible, set them off on a ride of discovery and gave them decisive power over the ending of their journey.

We launched Zenuity Drive at CES, where it became an instant hit. The experience has since become the topic of discussion within the organisation and outside of it. It has been described as a “finely executed work of art”, an enjoyable, comprehensive demonstration of a complex concept and an inspiring conversation starter around autonomous driving.

In addition to the demo in itself, we injected some long-lasting value to the company’s operations: by introducing a virtual world, we put the necessary infrastructure in place, making it possible to develop additional scenarios for Zenuity. With gradual build ups we can deliver a fuller product on the long run that can serve a multitude of purposes: from a high-end workshop tool for the engineering teams to the main attraction at employer branding conferences and automotive trade shows.

And what’s most important, by mixing immersive tech with inspiring storytelling, we managed to narrate a more impactful story about the brand and helped Zenuity leave a lasting impression to its employees, clients, and partners.

Uncloudy & Co helped us elevate what could have been a mundane demo to a fully immersive experience that people would like to try over and over again. We had high expectations regarding the functionality but Uncloudy & Co, with their high standards and fine aesthetic delivered a storytelling device that blew our expectations completely.

In order to create something that would keep the users engaged for a good five minutes, we decided to balance the complexity of the product with the fun potential provided by VR technology. As long as we kept the demonstrated specs of the technology consistent with the real life specs, we knew we could stretch the limits of our imagination about what was possible.

To facilitate users of various levels of understanding around self-driving technology, we enriched the experience with delightful bits and elements of gamification. We populated the space in-between key events with voice over explainer cues, created a virtual dashboard displaying system logs and highlighted the interaction between the system and the surrounding objects in real time. This way we delivered a fuller experience, while enabling the users to perceive the world through the system’s “eyes”.

Finally, for a product demonstration to be complete, the user had to experience the safe stop. To that end, we introduced a split ending scenario: after the activation of the self-driving feature, when the requirements of the feature break, the users would be given a short time window to take over the vehicle. If they didn’t, the vehicle would initiate a safe stop manoeuver. This means that the users had to “fail” the test, in order to fully experience the demo. To make sure this would happen, we placed a script at the end of either finale prompting them to try the experience again, but this time choose the alternative path instead. 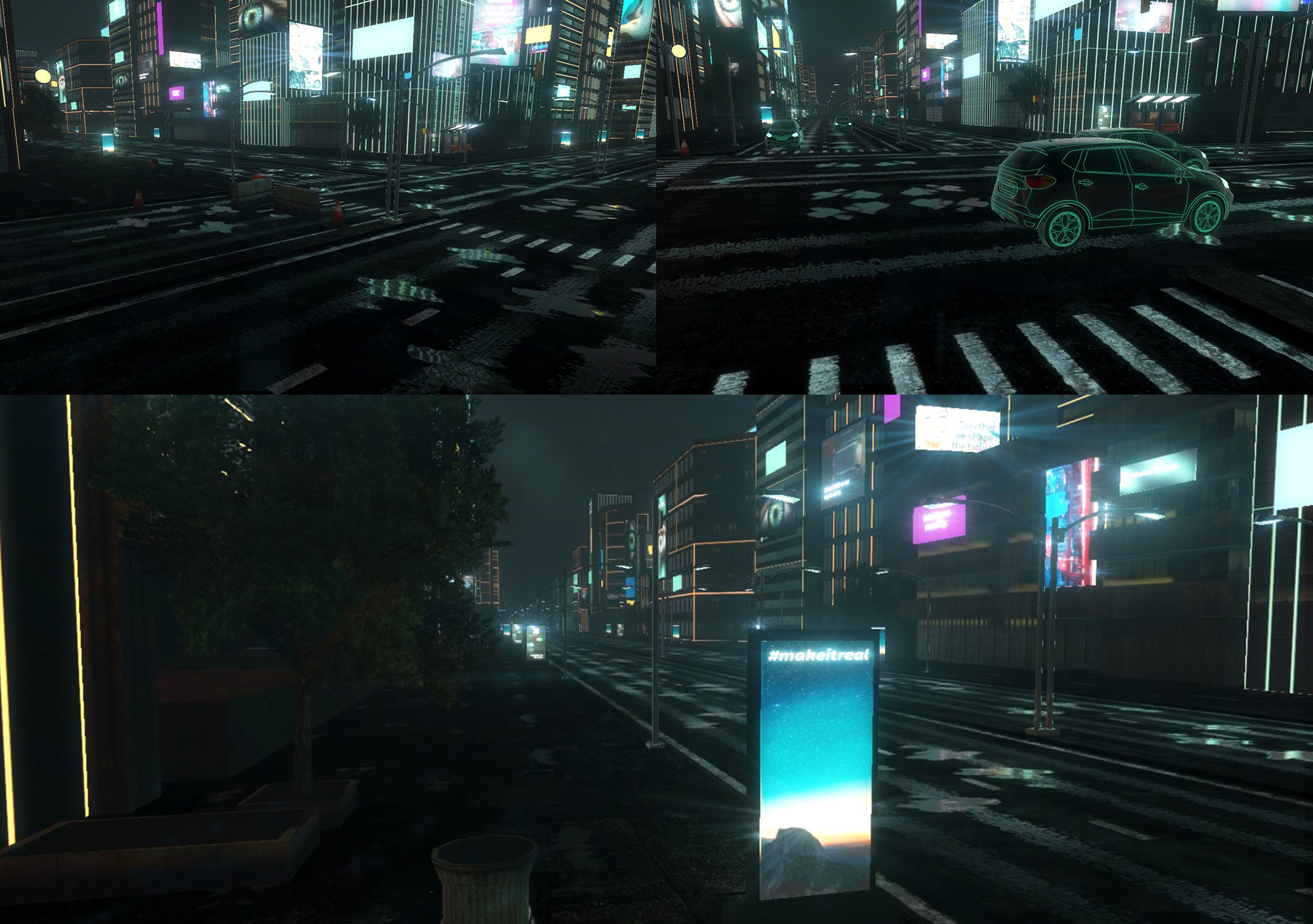 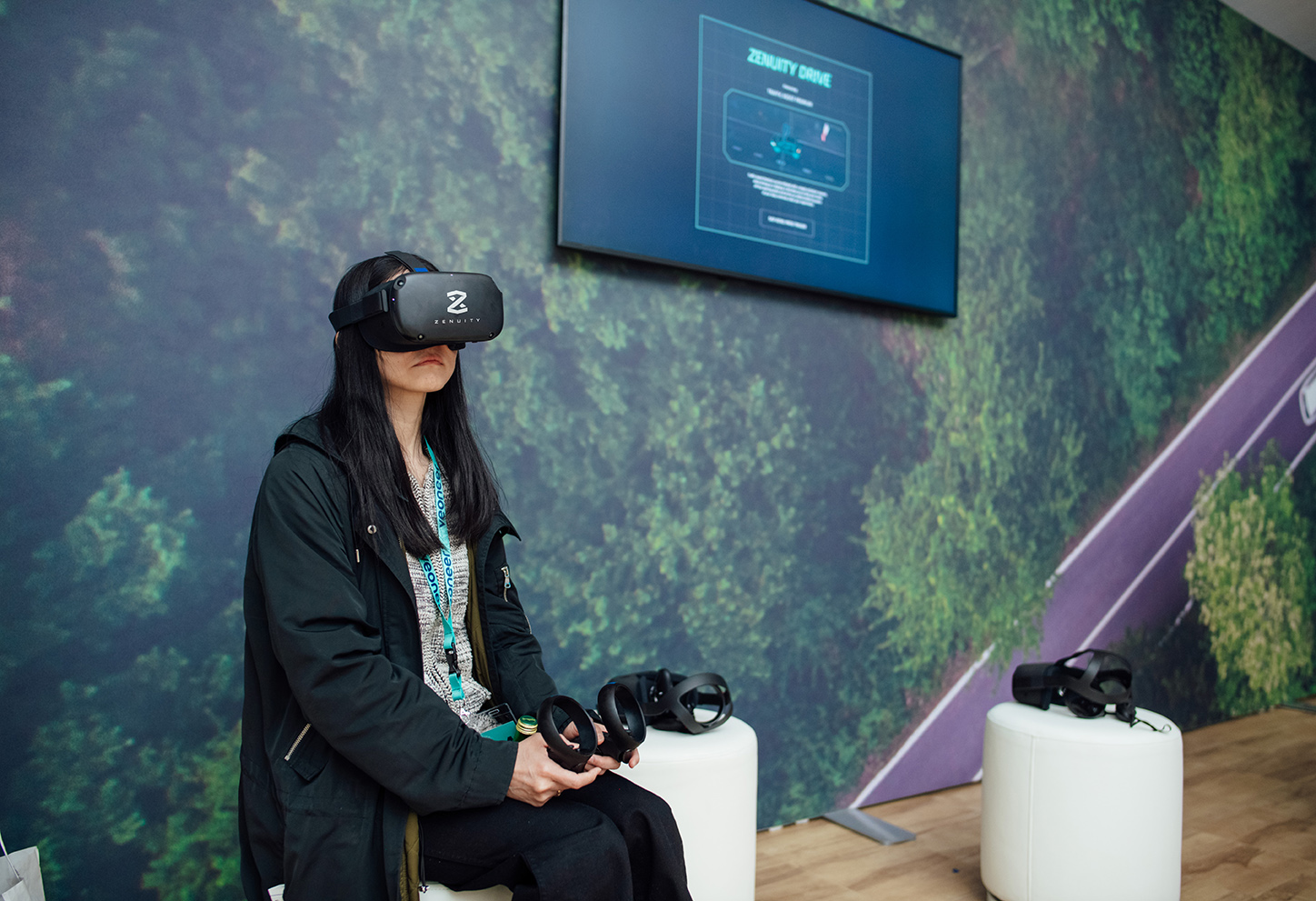 The experience runs on Oculus Quest. The device’s untethered nature and its simple setup makes it a perfect fit for busy venue demonstrations, but also for on-the-go tryouts.

If you would like to know more about the final product, or are interested to discuss how to employ virtual reality to tell powerful stories for your organisation, do not hesitate to contact us at hello@uncloudy.se

At Uncloudy & Co, we are always happy to hear from fellow cloudsurfers. Have you got an intriguing business challenge, or simply are curious about our offering, don’t hesitate to drop us a line.

We reimagined the traditional institution’s brand and launched controversial – for the branch – campaign.

We designed the online entry system for one of the most acclaimed award shows in the advertising industry. And we made a charitable cause out of it.